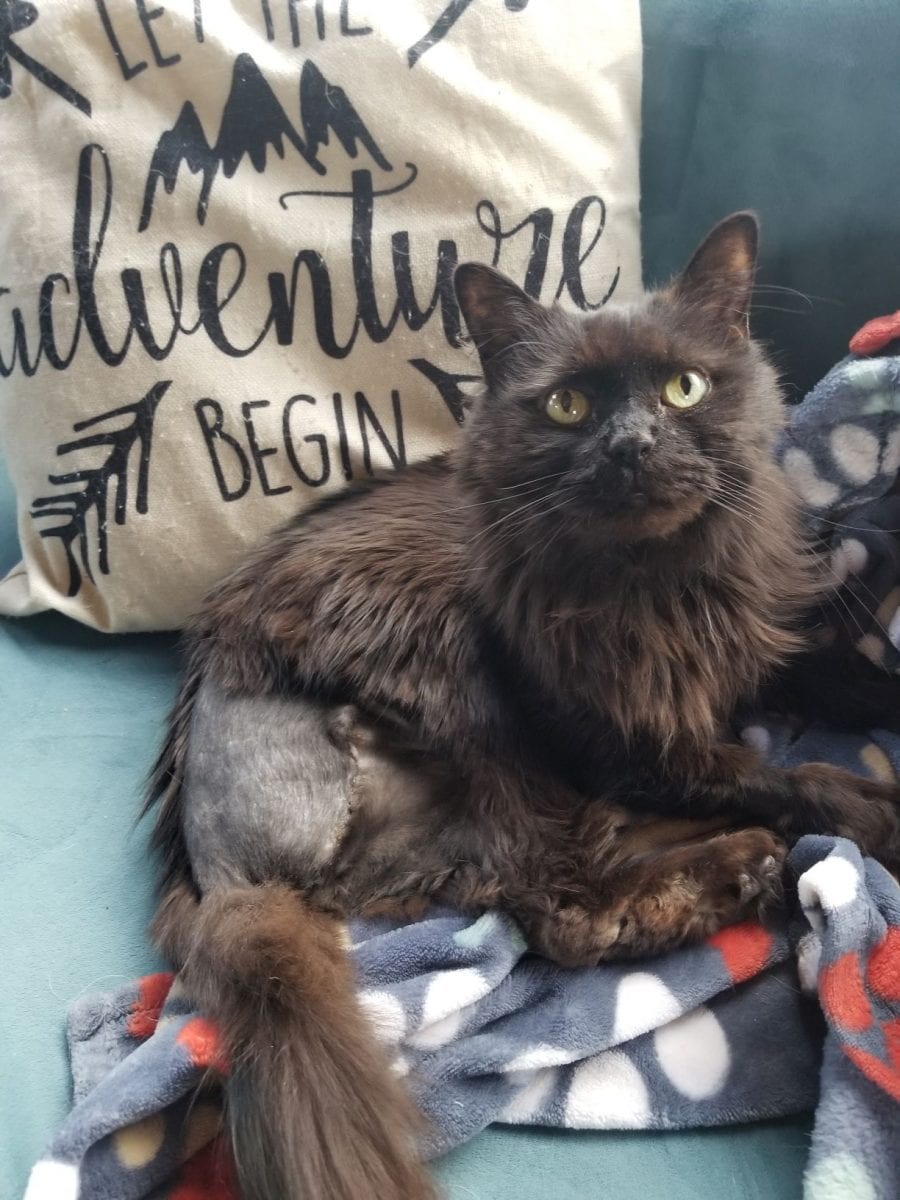 I haven’t posted lately because we’ve had limited cell service, but Tag, or Mr. T as I call him, is doing great!  I struggled with learning how to pick him up for a bit, but he’s allowing me to hold him way more often then he ever did before the surgery.  This just tells me that he was in pain prior to the surgery and probably was for years!  I hate that I didn’t suggest amputation years ago!  Our vets always said he was fine unless it caused him pain, but I’m beginning to think that Mr. T’s spicy attitude over the years may have been due to pain and not necessarily a personality issue!

Besides the fact that Mr. T was born footless, he also has a shortened urethra and kitty IBS.  About five years ago we took Tag to the vet after he was meowing in the litter box and producing only small amounts of urine.  The x-ray’s showed a shortened urethra which our vet said he had never even seen before.  Tag had a UTI and his shortened urethra was inflamed. There were no signs of crystals or blockage, so the initial treatment option was antibiotics.  Two weeks of antibiotics cleared the infection and Mr. T has had no other urinary issues. New x-rays showed the inflammation was gone allowing his urine to flow more freely.  We know its something we need to consistently watch and we hope it was a one time infection that just happened to lead to a new discovery about Mr. T’s deformities.

Tag has also struggled with chronic diarrhea and was diagnosed with possible kitty IBS a few years ago.  He was treated with antibiotics again and we changed his food protein source and moved to grain free food.  We’ve adjusted brands and protein sources three times and have found that he is best on salmon based food.  His coat is much softer and silkier, and his stool habits have transformed for the better.

Mr. T is a resilient kitty and he’s been through a ton over the past seven years since my Dad died. Lately he has been much sweeter and needier of my attention and I welcome it.  I always wanted him to be a cuddlier kitty.  I hope his sweetness holds out even after he’s fully healed!

This site uses Akismet to reduce spam. Learn how your comment data is processed.

About Your Tripawds Blog:

New Tripawds Bloggers: Please review your default first blog post for help getting started with your blog or review the Help Videos in your dashboard. Edit these widgets from your Appearance settings to remove this notice, upload a custom header photo, or choose from 130+ themes, and much more!