Tag is so active lately I’ve had to limit his activities!  I’ve added boxes and steps so he can get to his favorite windows.   There was a time when he would look at me for help with getting to a higher location, but now he just does it himself!  I feel like he’s doing too much, so I intercept quite a bit to help him out, but he struggles to get loose and just keeps on moving!   I don’t blame him for wanting his freedom, this guy has been in cat quarantine for almost three months!

When we first noticed the fistula on his stump leg, the vet we saw recommended he be quarantined for two weeks to let antibiotics do their work.  We had a larger dog kennel that we weren’t using and it became Tag’s temporary home.  At the two week recheck the infection was gone, but the wound wasn’t healed.  The other pets wanted to get to his leg to sniff and lick, so Tag became stuck in full time quarantine unless I was with him to monitor his movements.  Two weeks quarantine turned into two months. Surprisingly, Tag adjusted well to kennel life.  I still use it to keep him safe when we aren’t around and at night when I can’t know when Comet might be stalking him.  Tag actually chooses to sleep in his kennel even when he doesn’t need to.  He has a little cave of his own for protection and rest.

We are at Day 18 now and like I mentioned, this old man just wants to run, jump, play and pounce.  I saw him bow stretch yesterday for the first time and he spent about an hour playing in some cardboard boxes.  He’s also been getting free time to sleep in our bed during the day.  He really missed that bed! His incision is still visible because the hair hasn’t grown back yet, but it’s clean and almost completely healed. He never licks or chews on the area.  Maybe he’s been so used to having a bum leg that it actually feels better now!

I’m completely surprised at how active he’s decided to be.  I really think his recovery is much easier than most kitties, after all he’s always been a Tripawd and he knows how to move around like one.  I attached a a pic of Tag drinking from our elevated dog water bowl.  He’s always preferred to drink this way, even though we also have a two other water dishes at floor level.  It’s not noticeable in this picture, but his left back foot is pointed extremely outward. When he stands for more than a few moments the left foot always points in this direction.   It’s an adjustment that has happened over time and is now permanent. 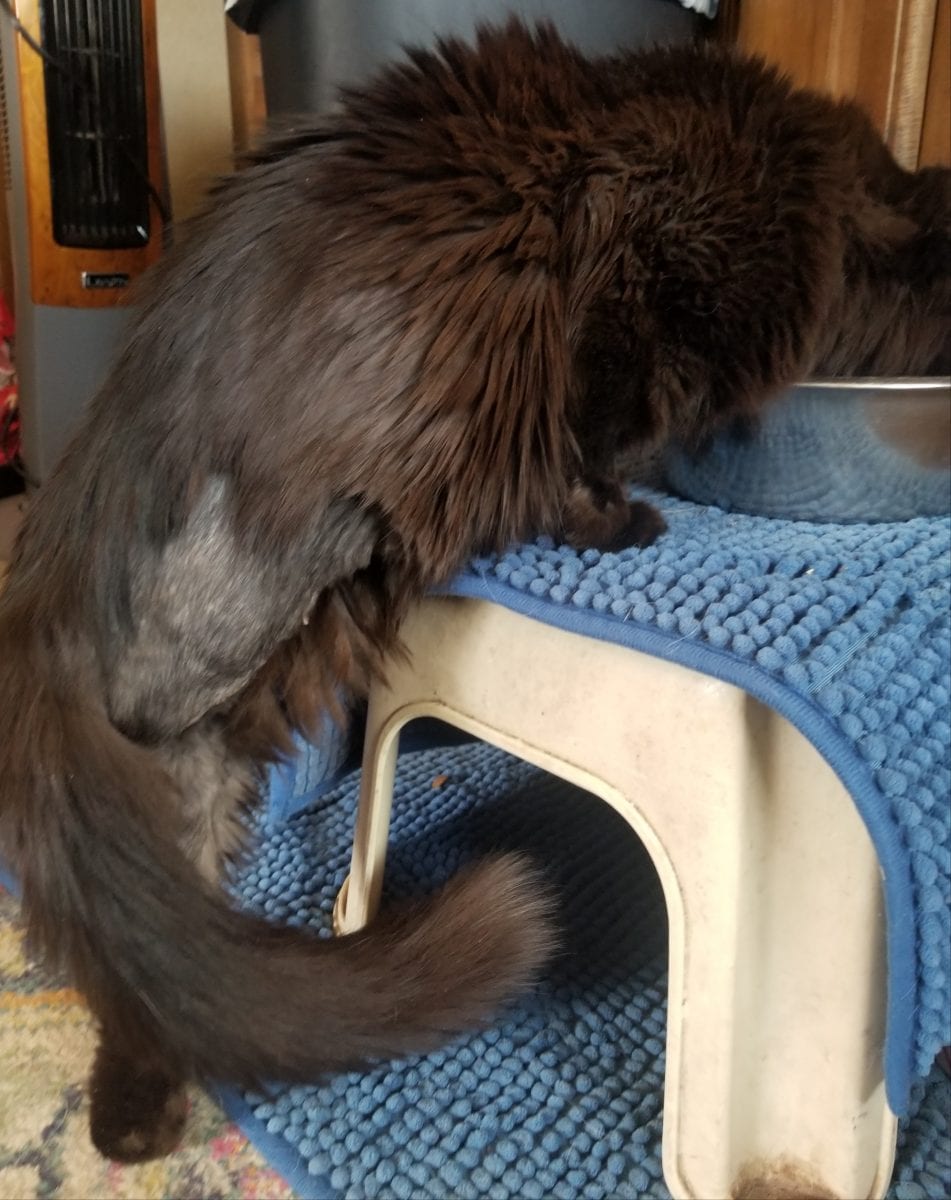 One thought on “Getting Back to Normal”

This site uses Akismet to reduce spam. Learn how your comment data is processed.

About Your Tripawds Blog:

New Tripawds Bloggers: Please review your default first blog post for help getting started with your blog or review the Help Videos in your dashboard. Edit these widgets from your Appearance settings to remove this notice, upload a custom header photo, or choose from 130+ themes, and much more!